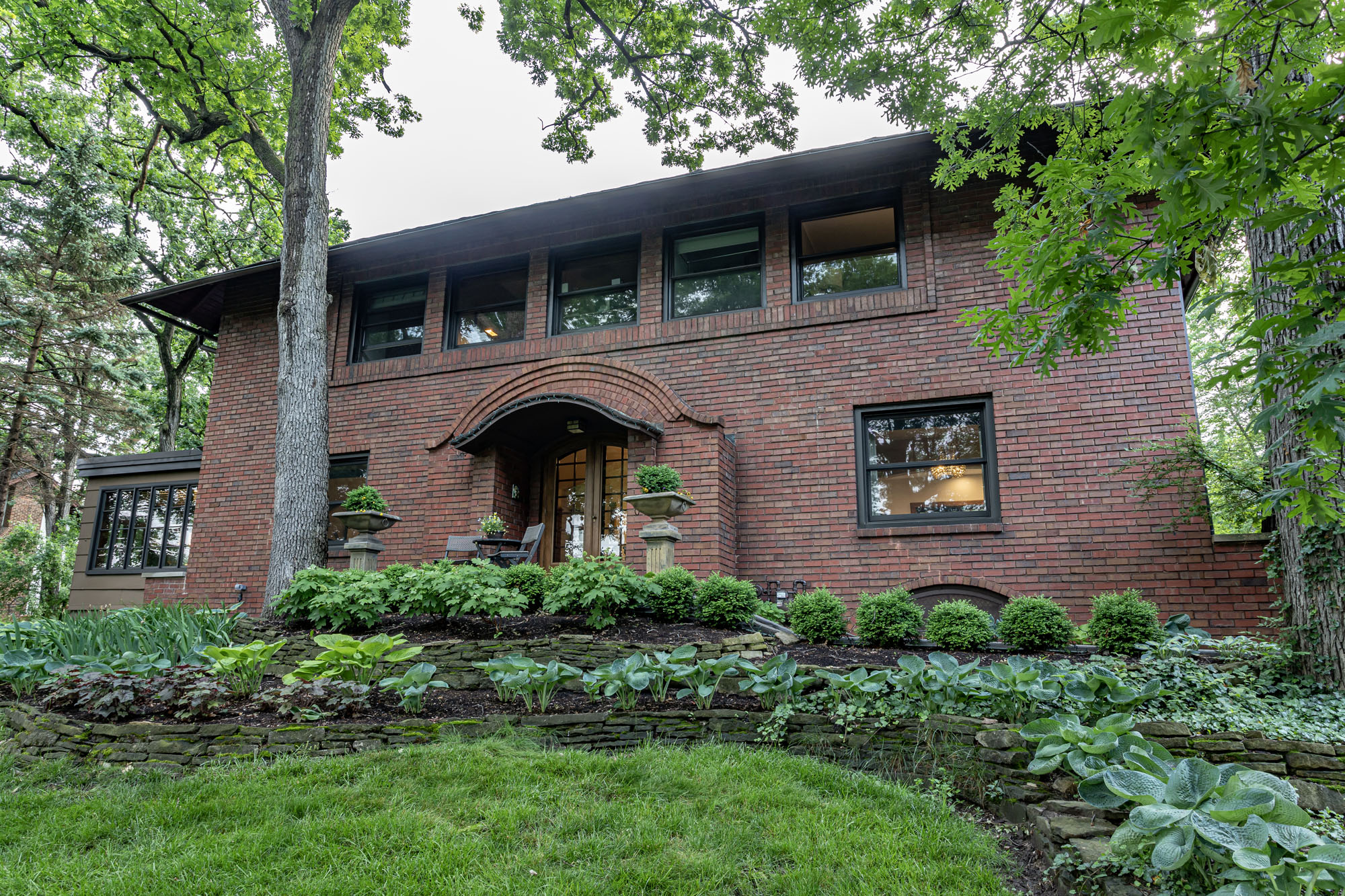 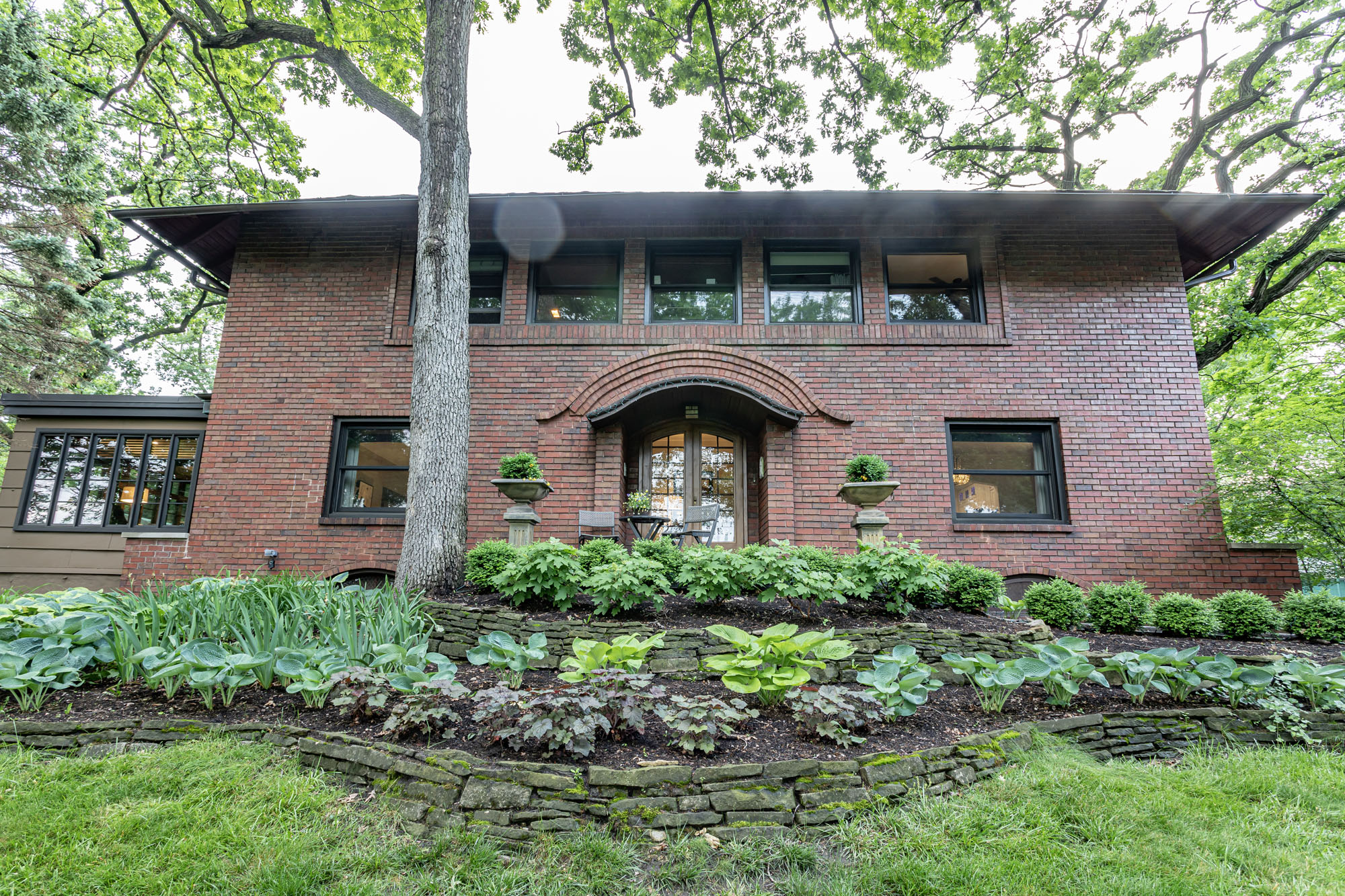 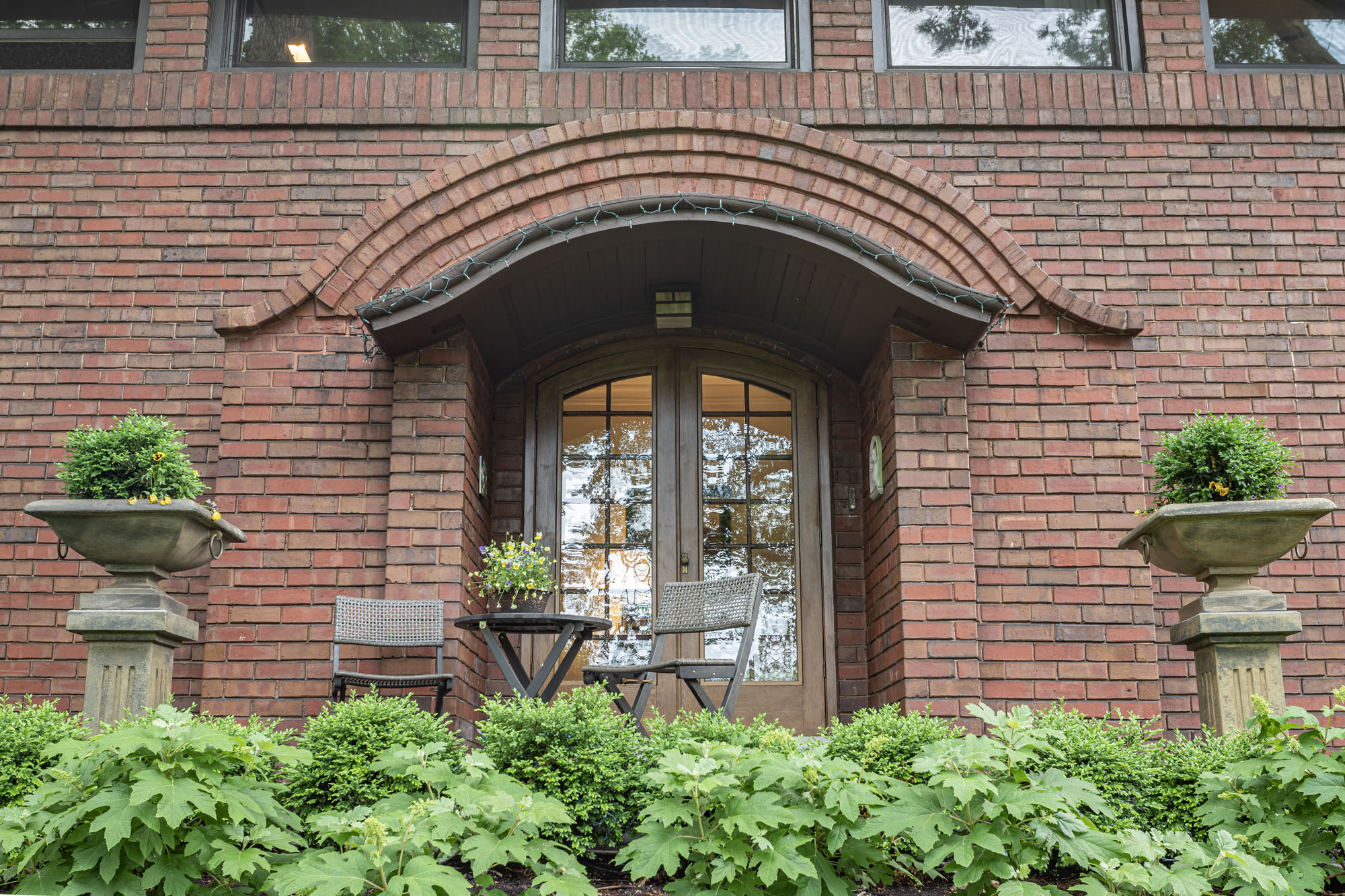 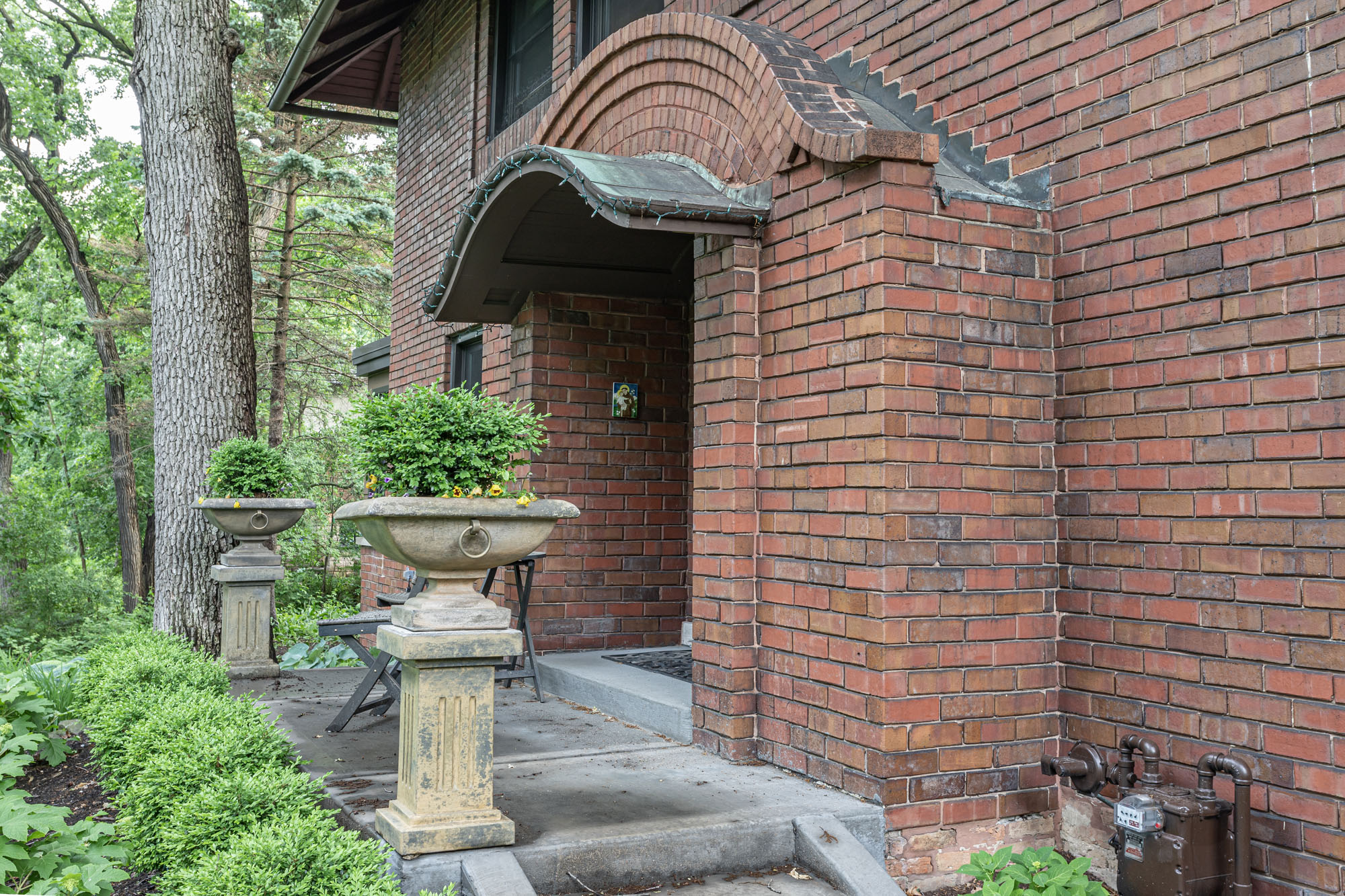 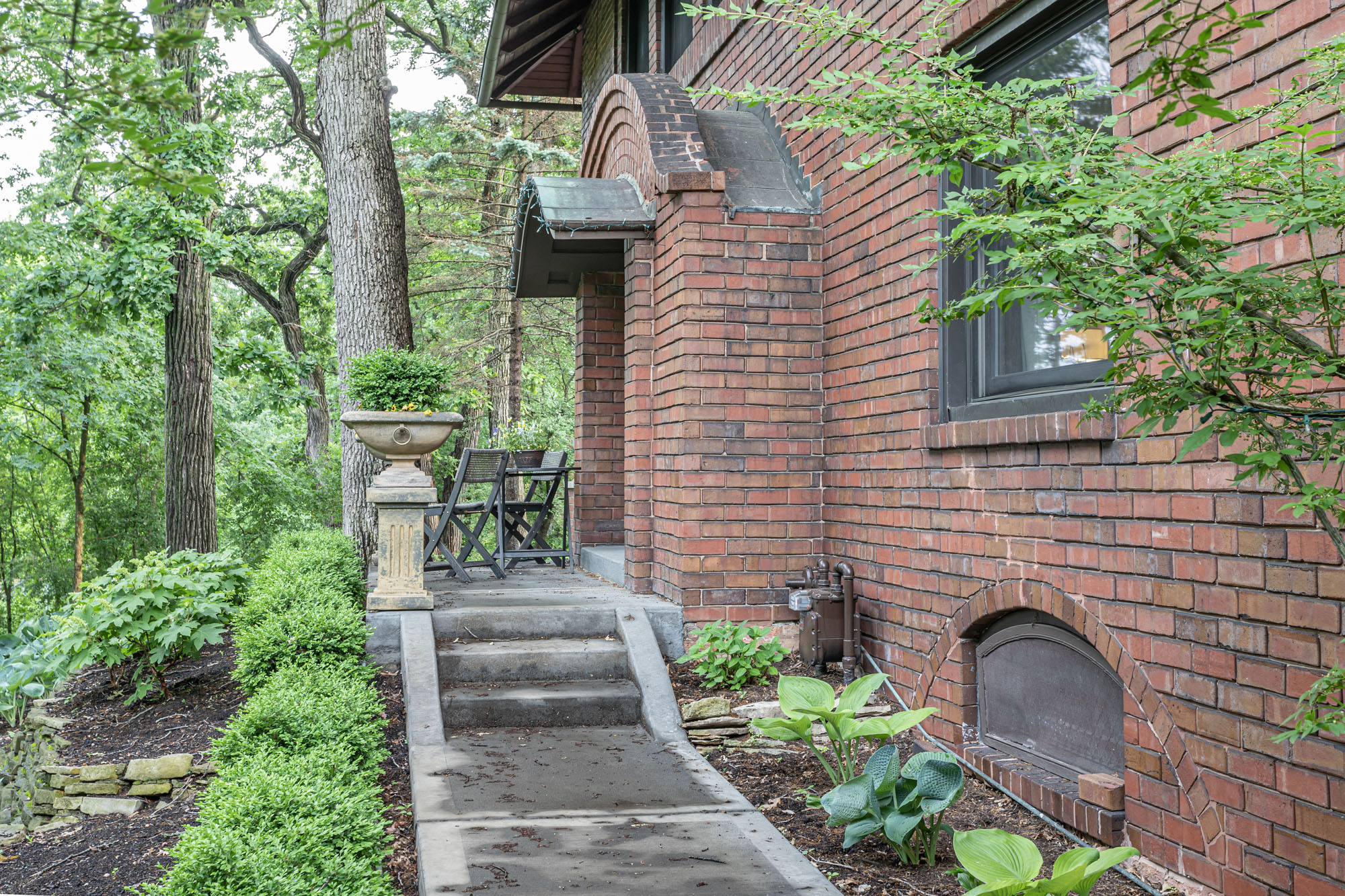 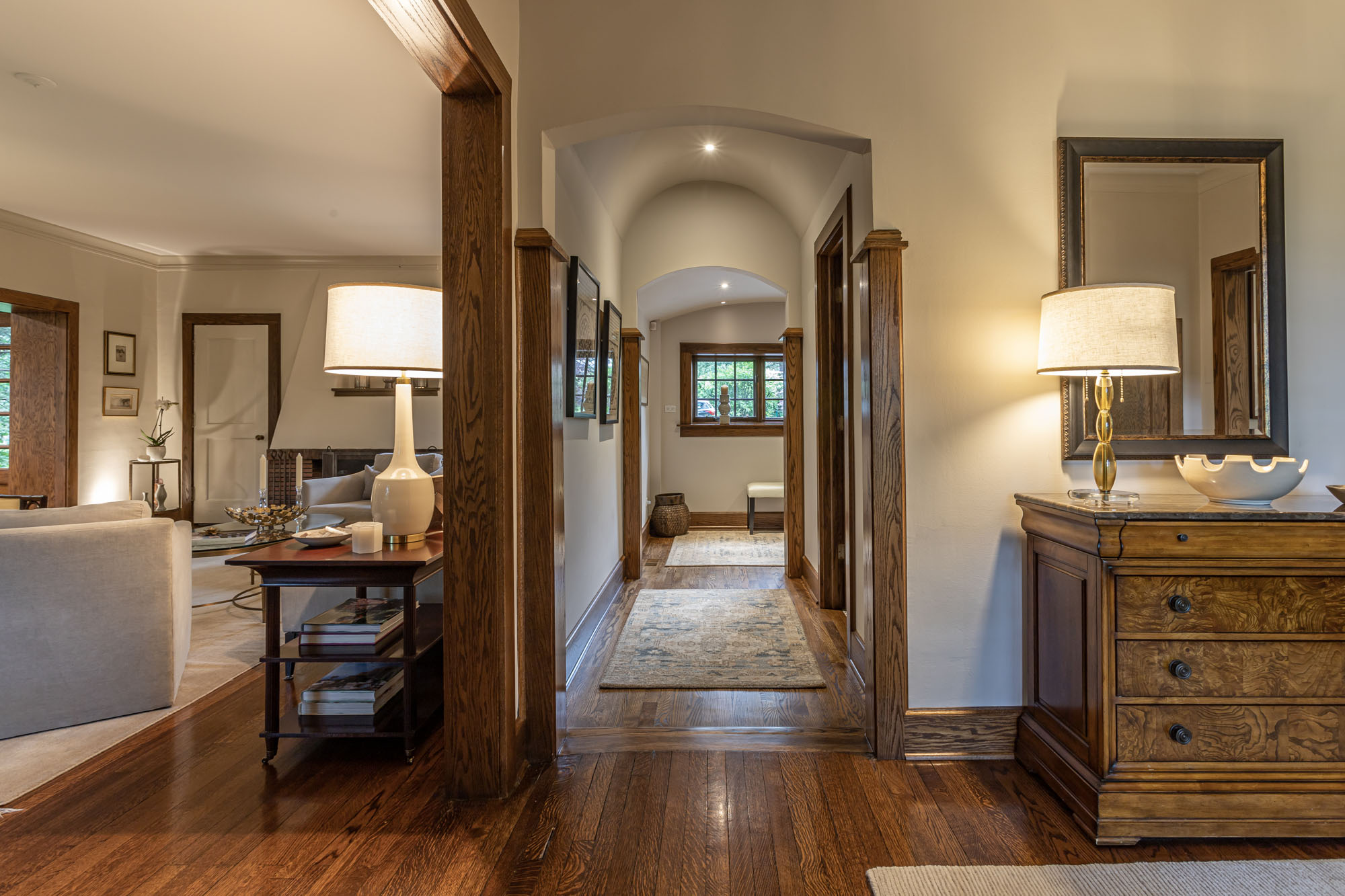 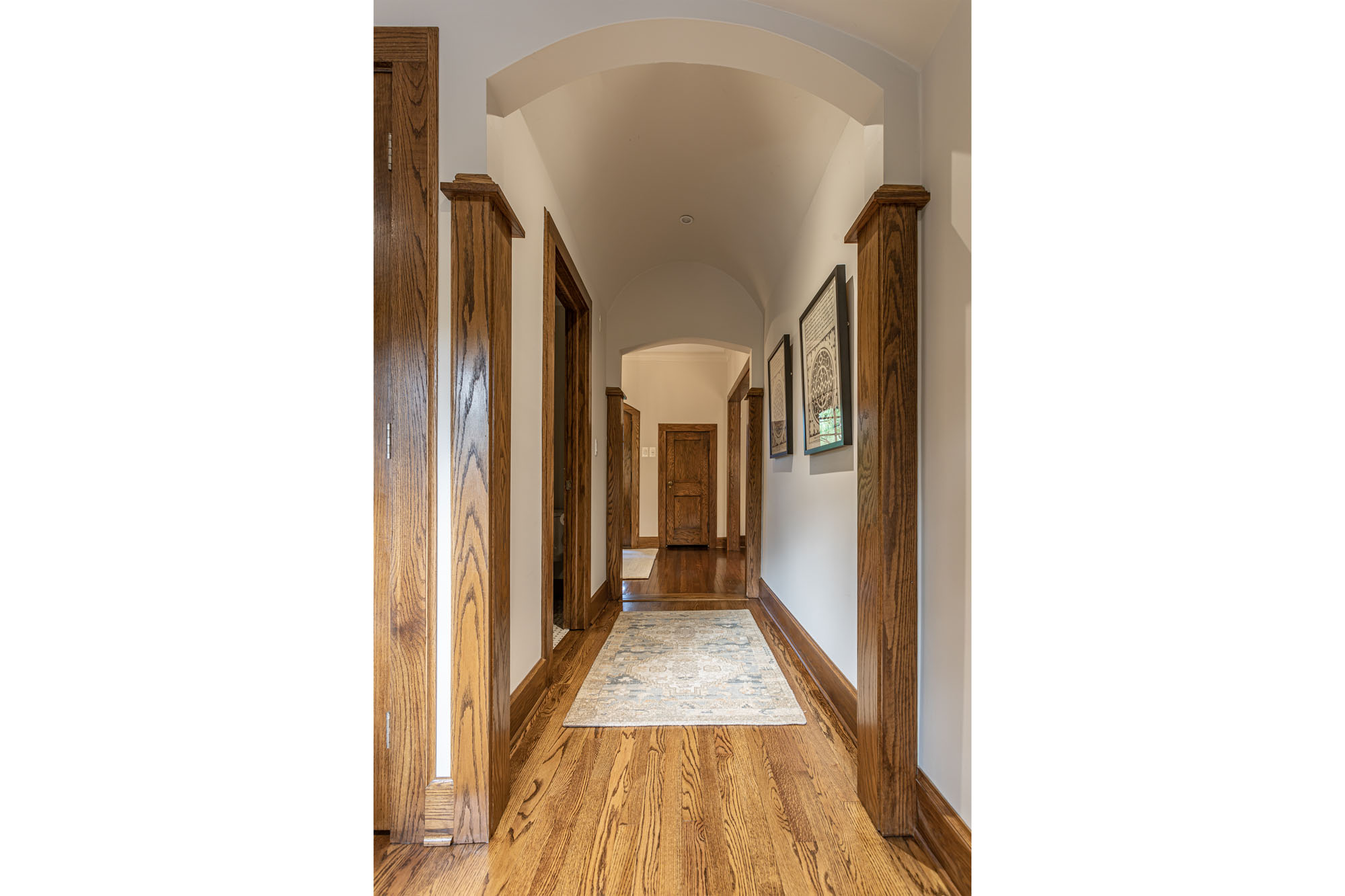 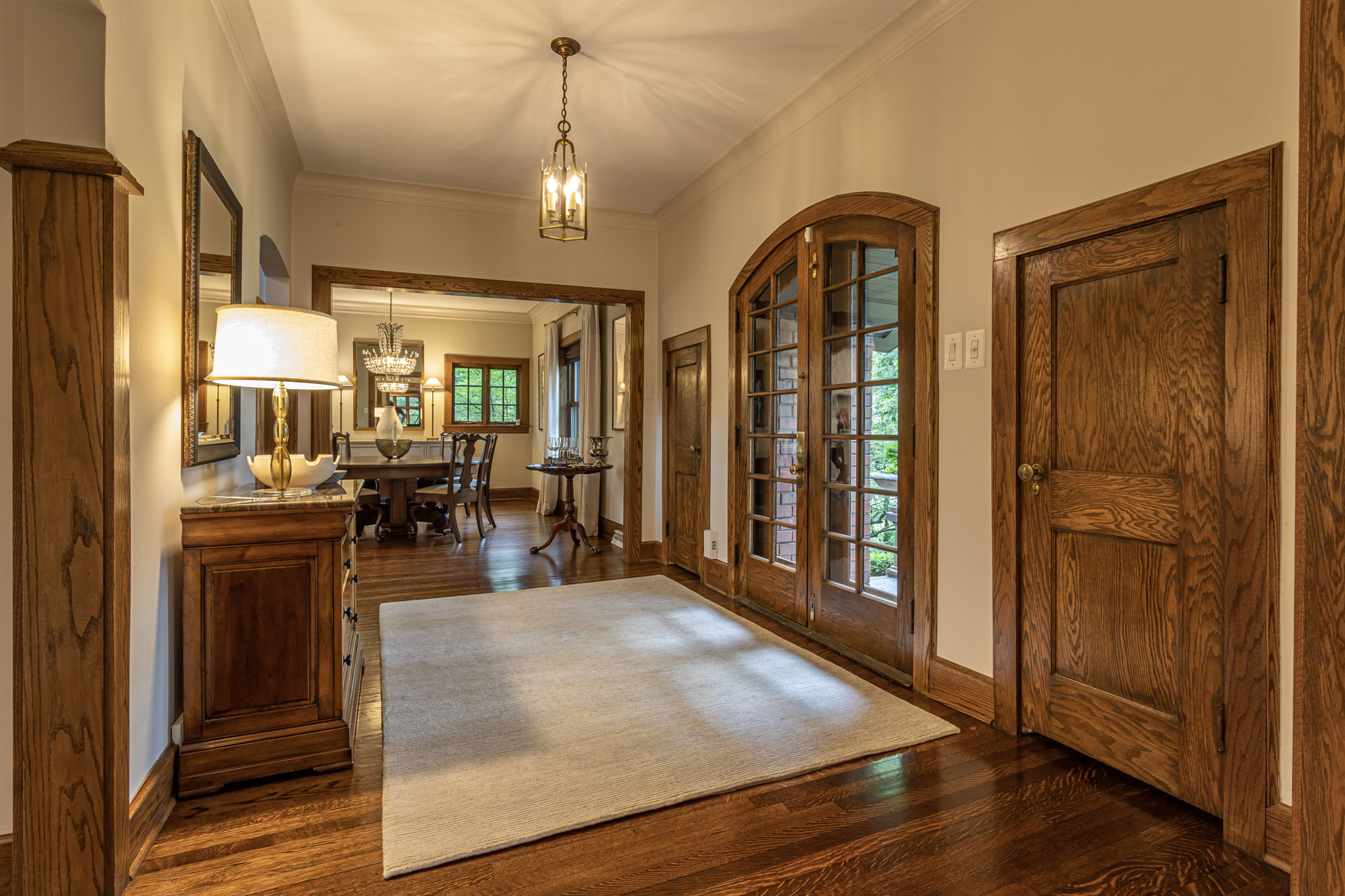 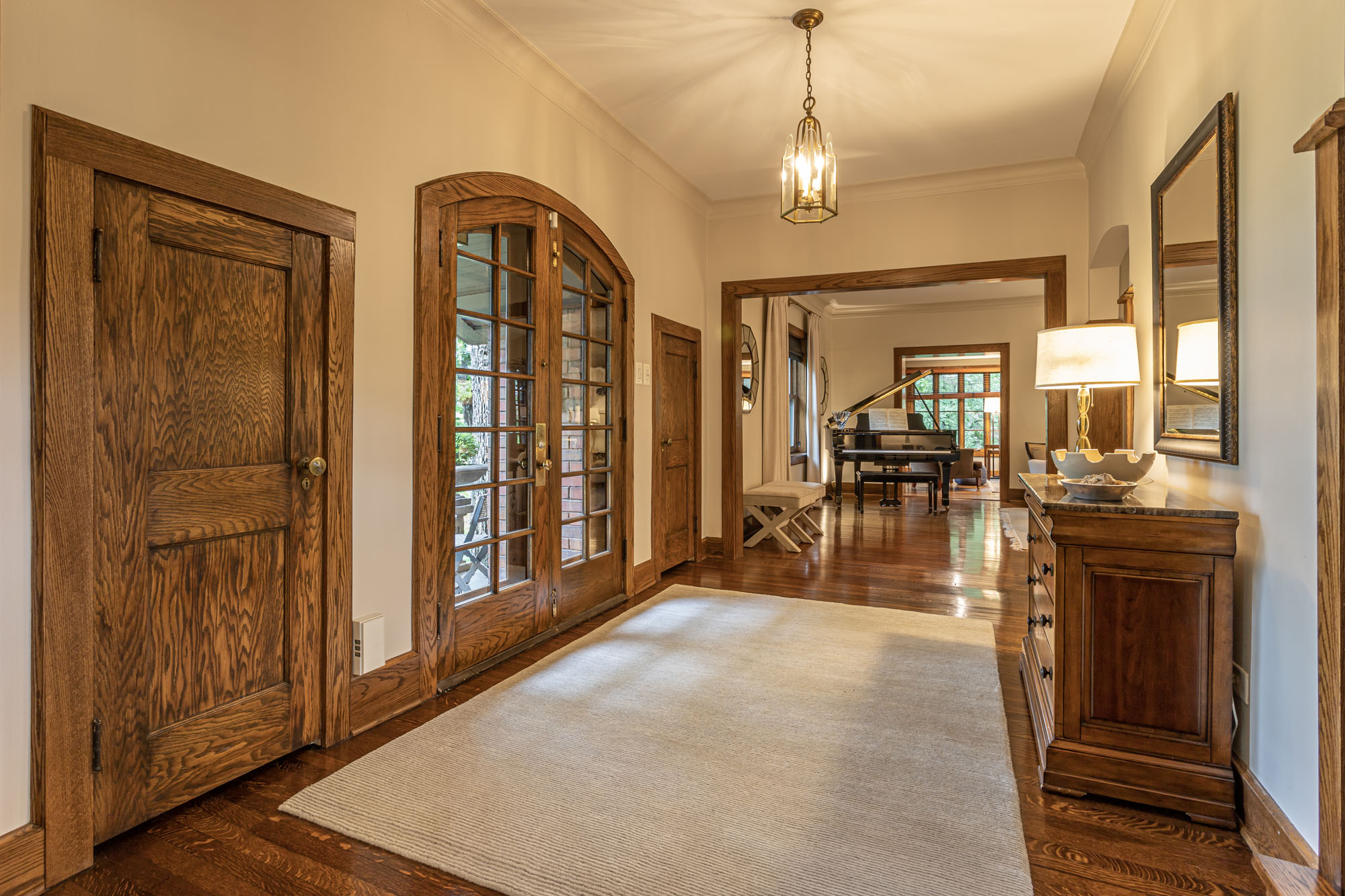 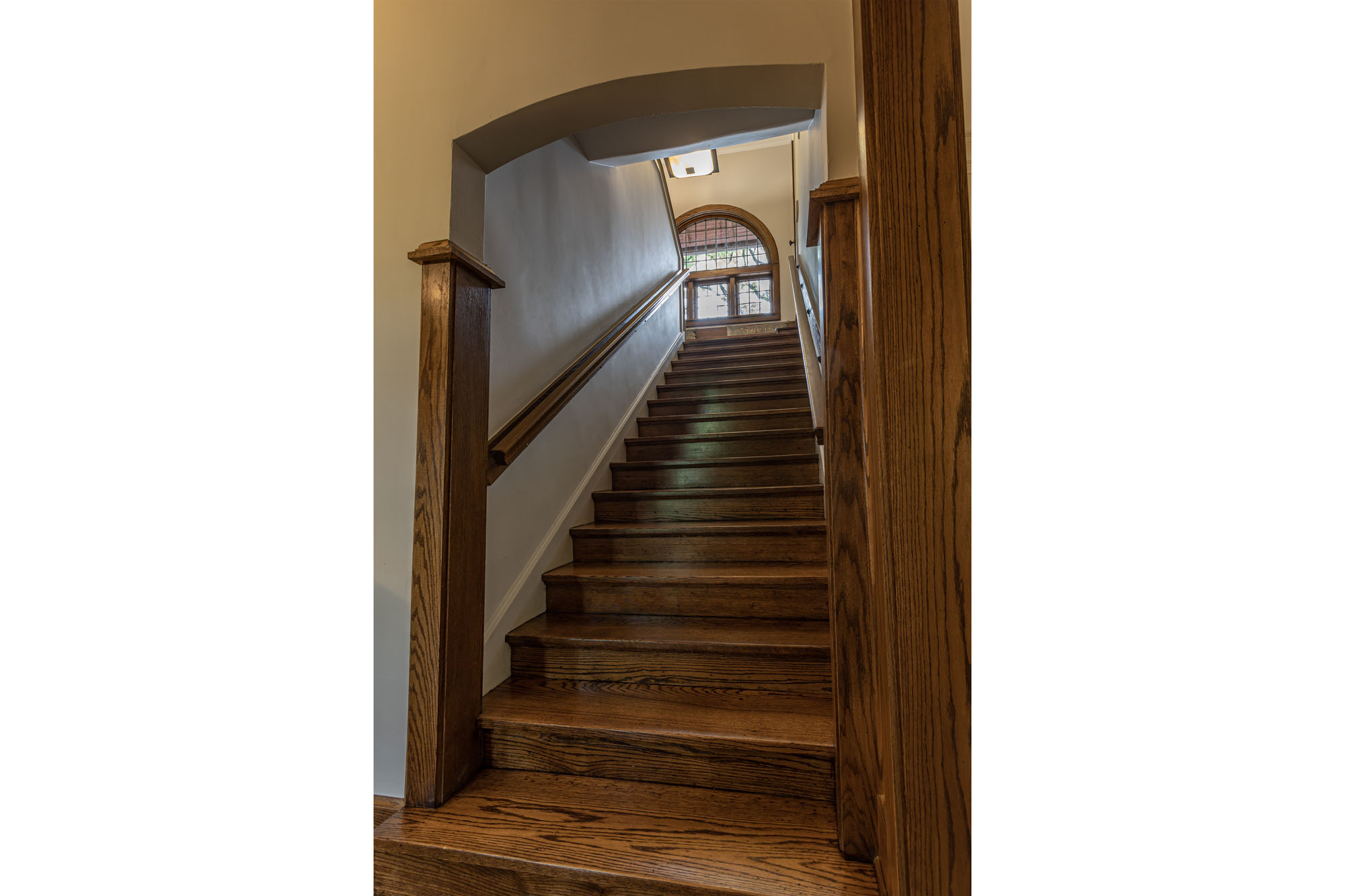 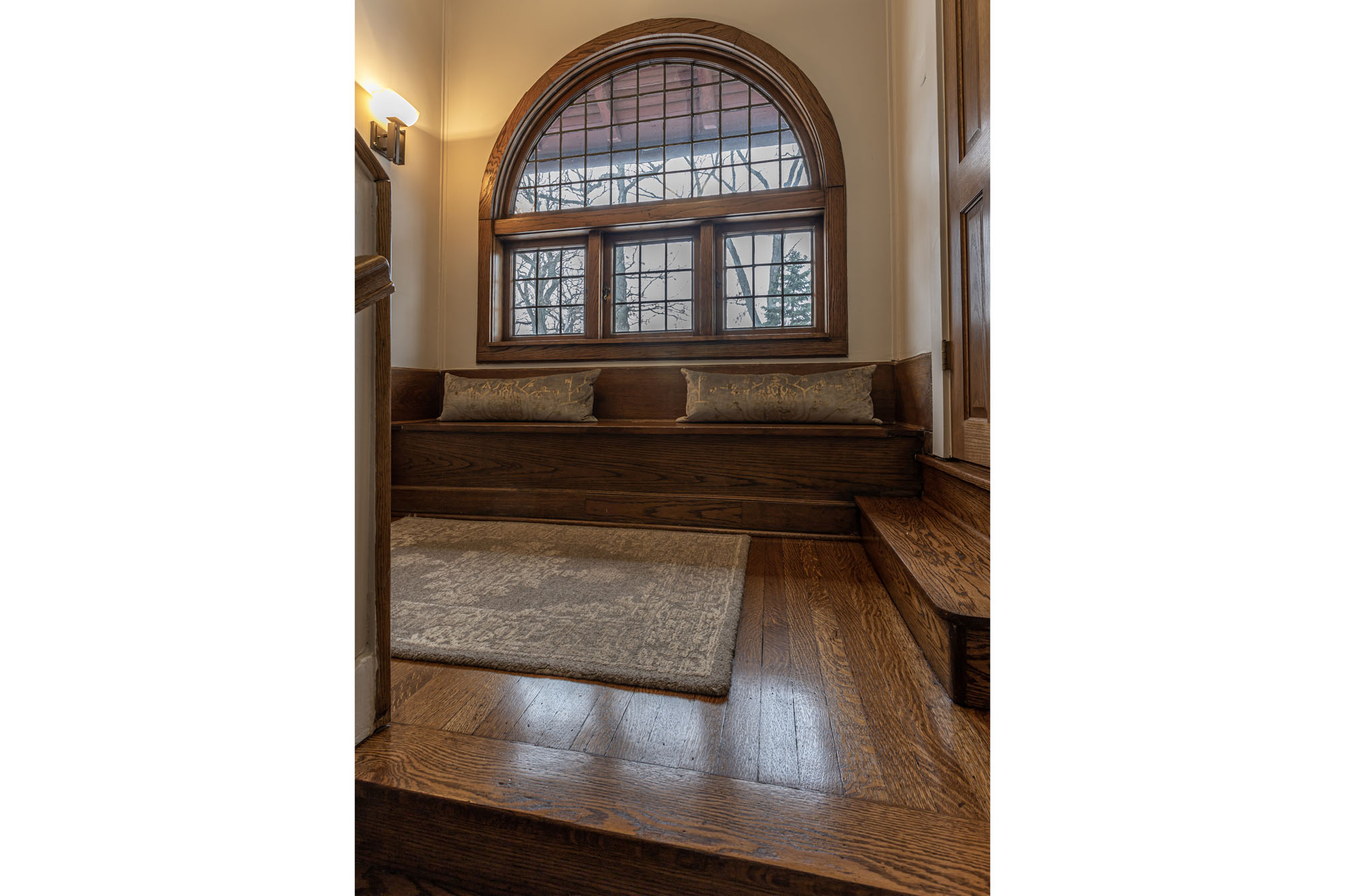 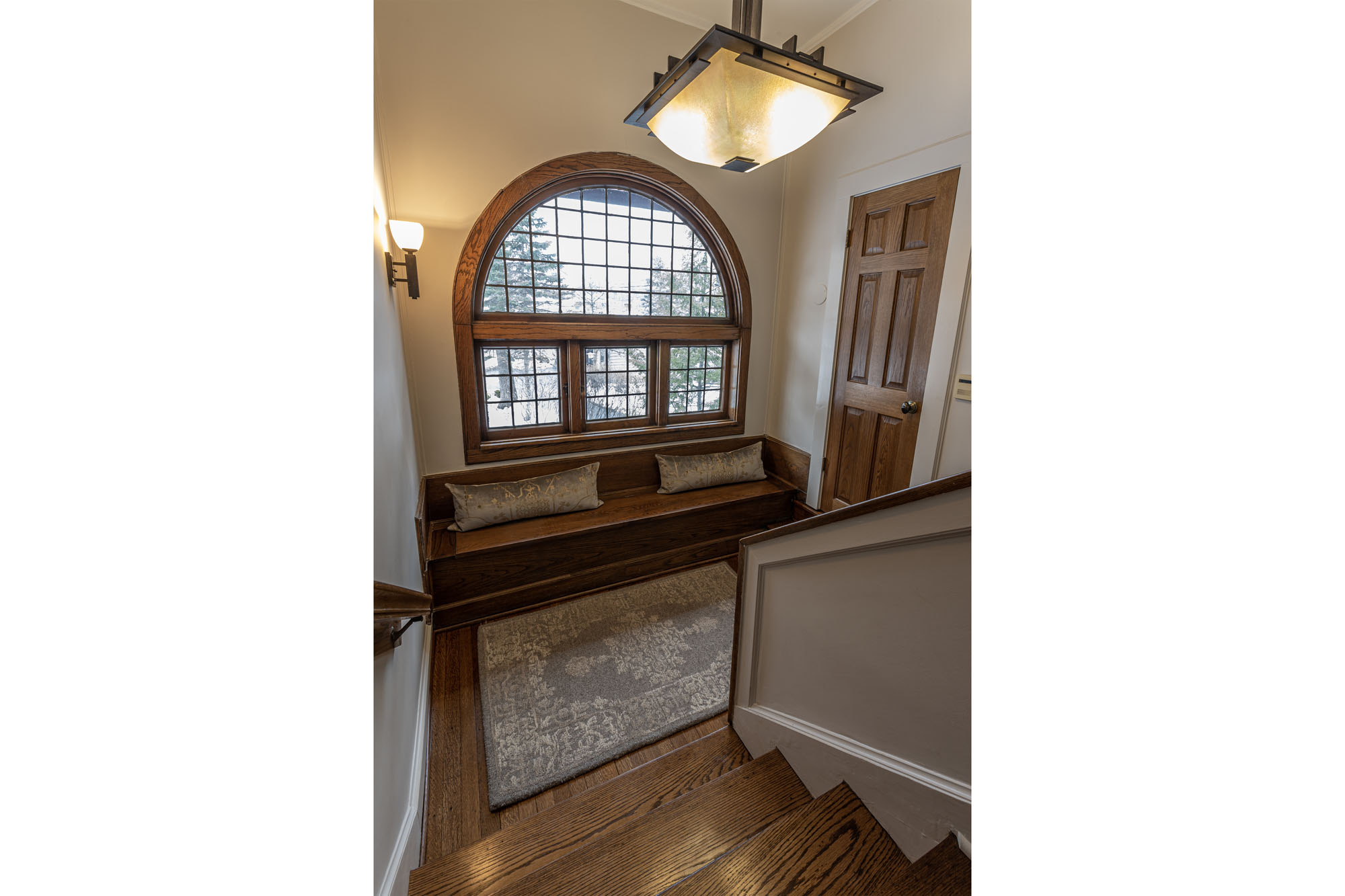 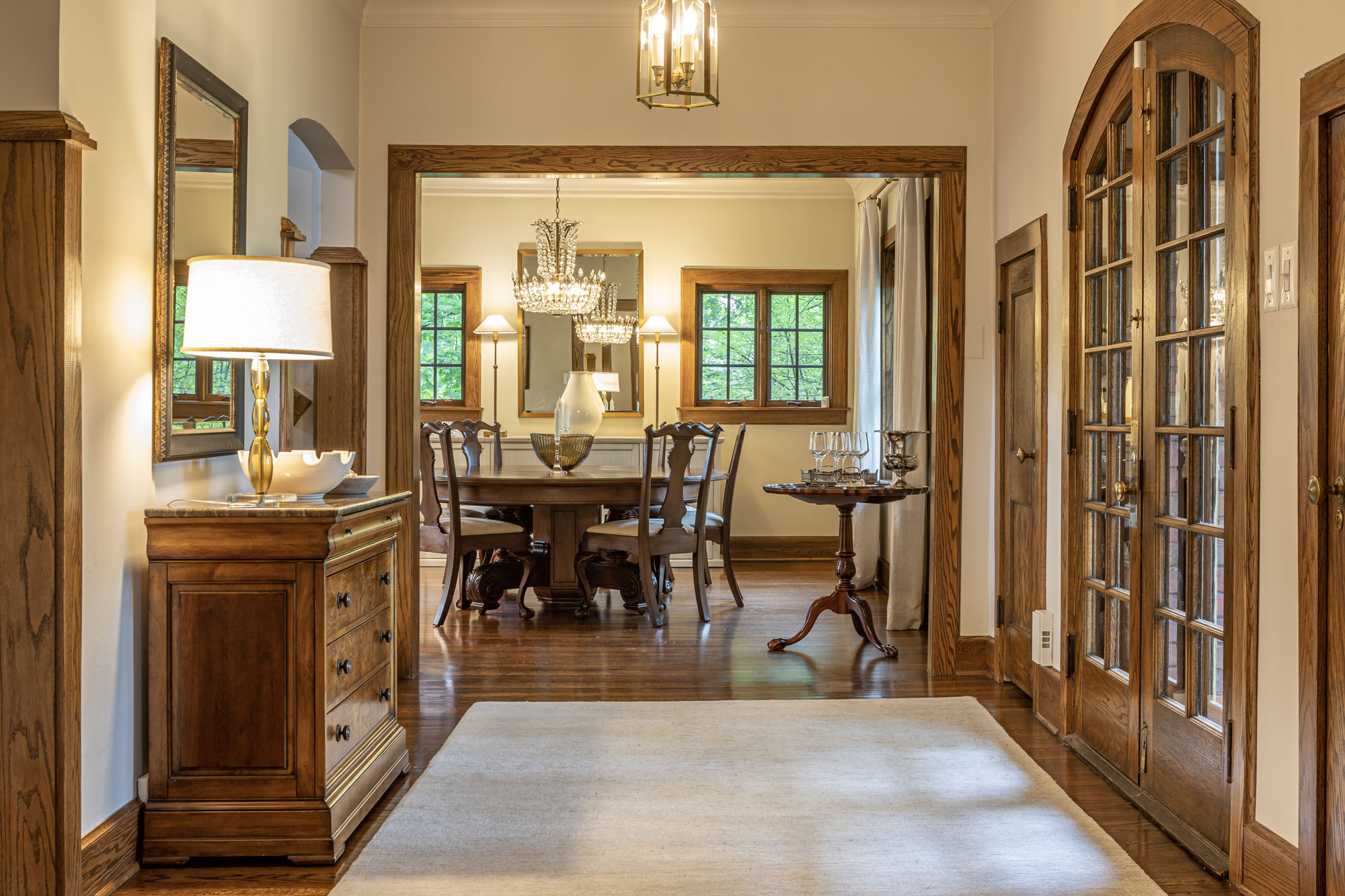 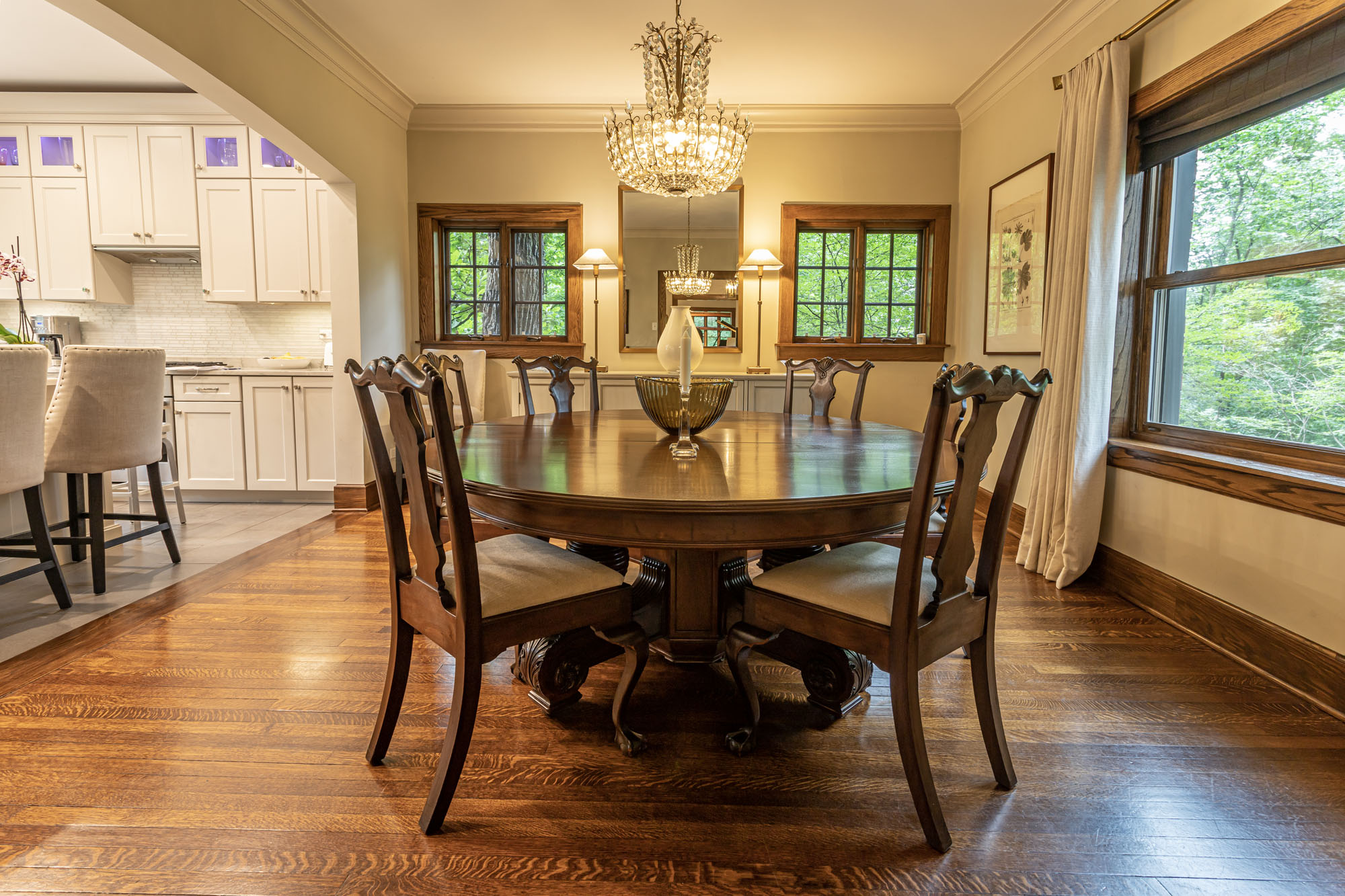 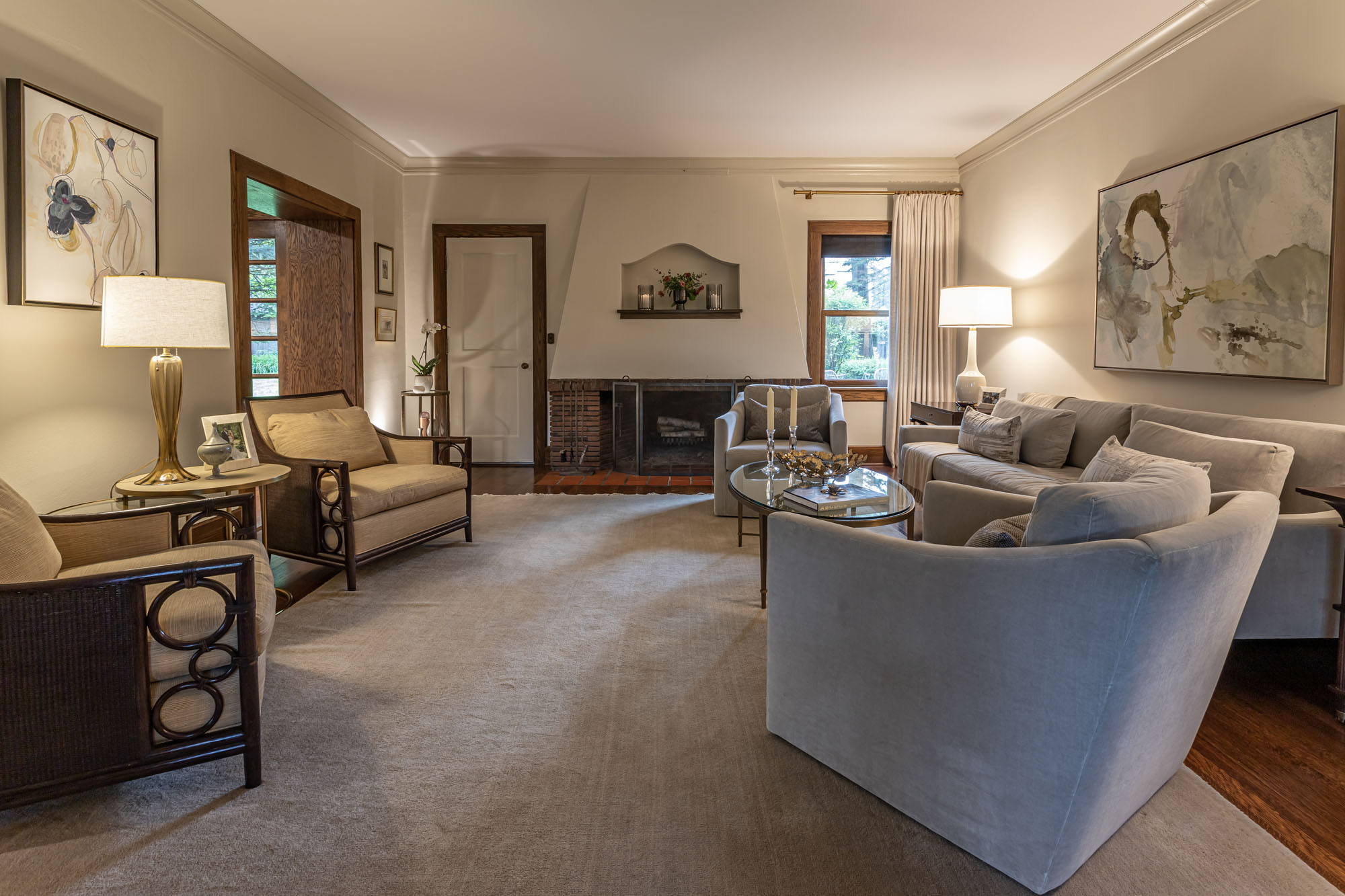 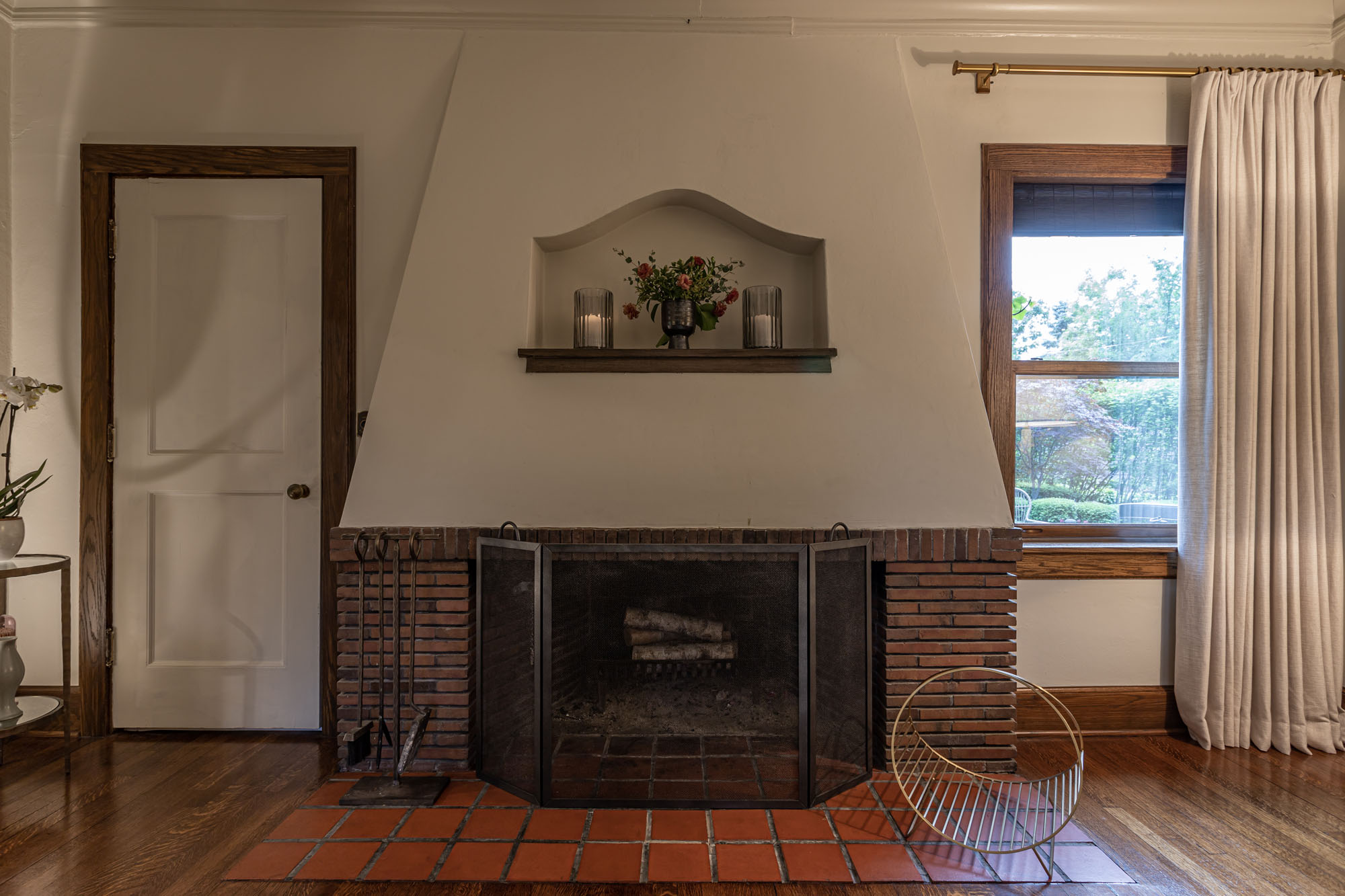 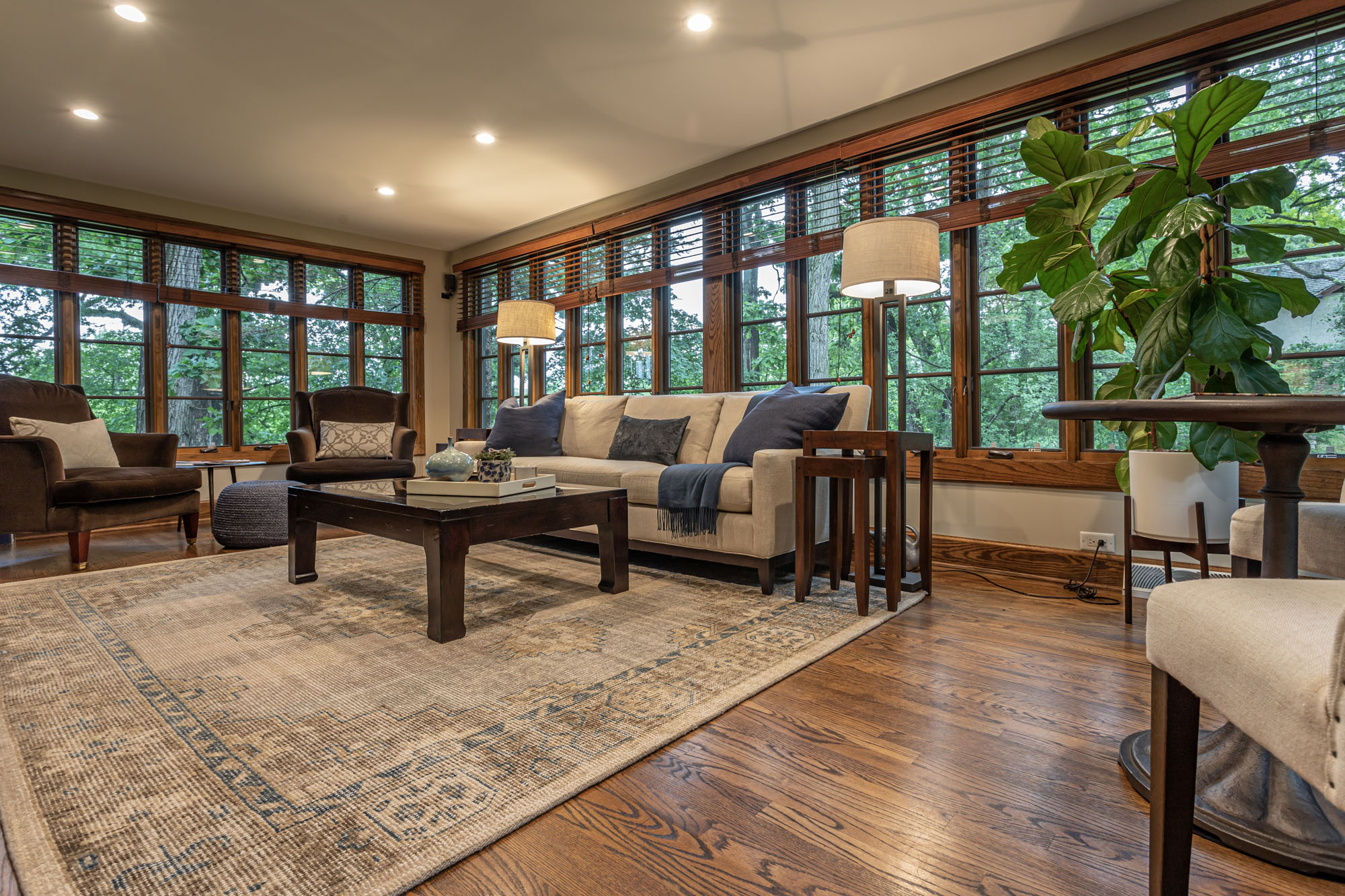 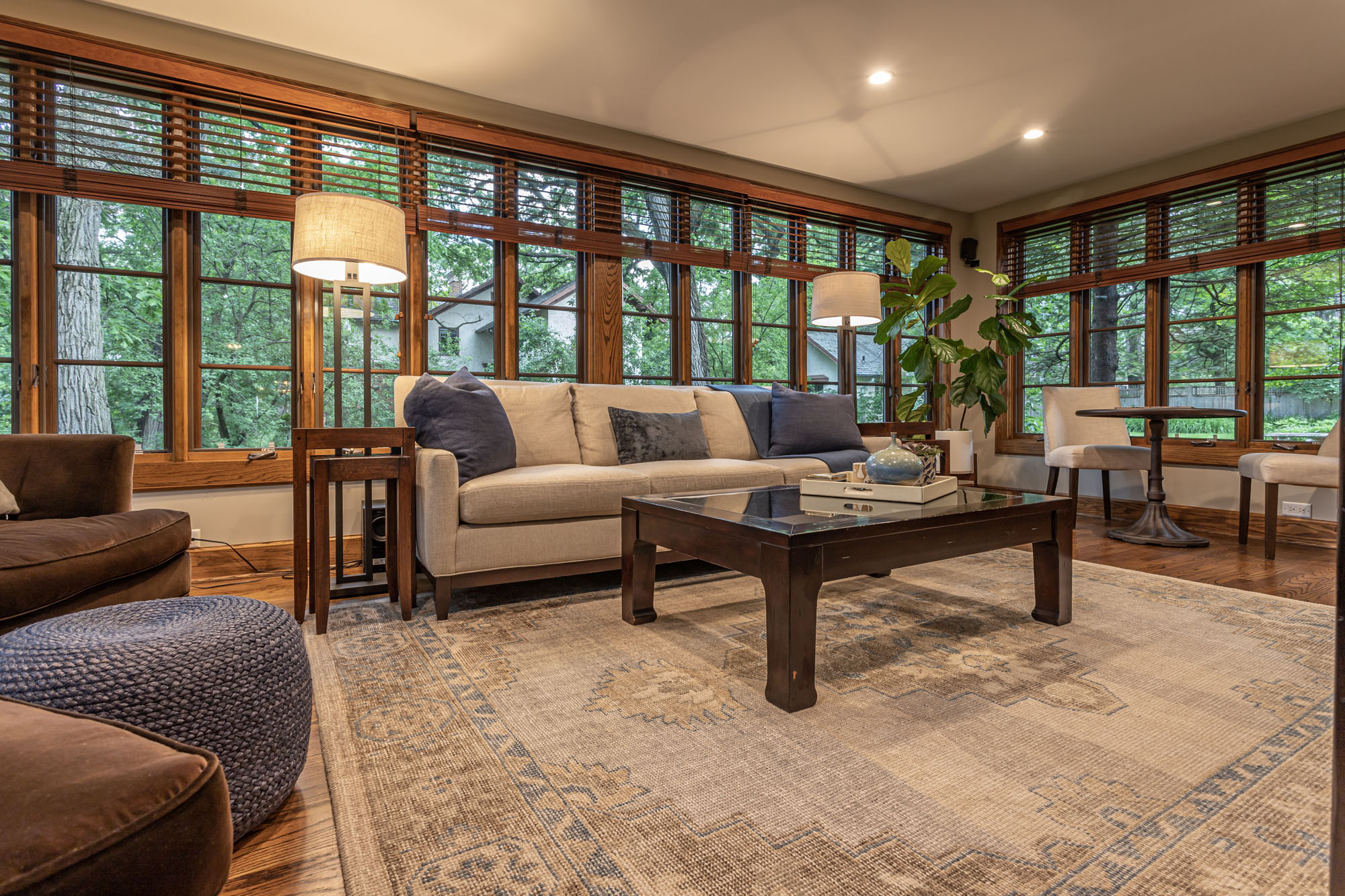 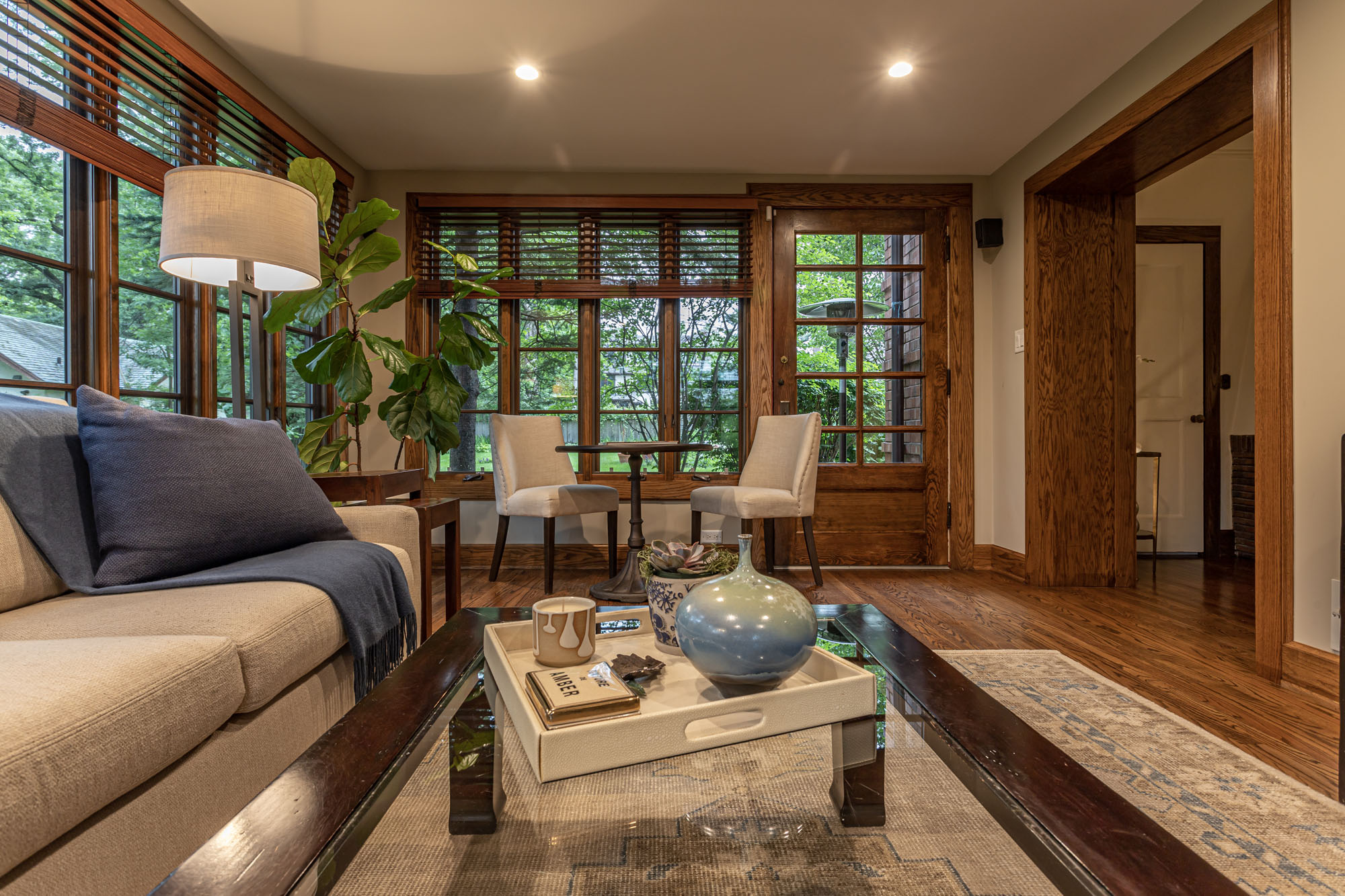 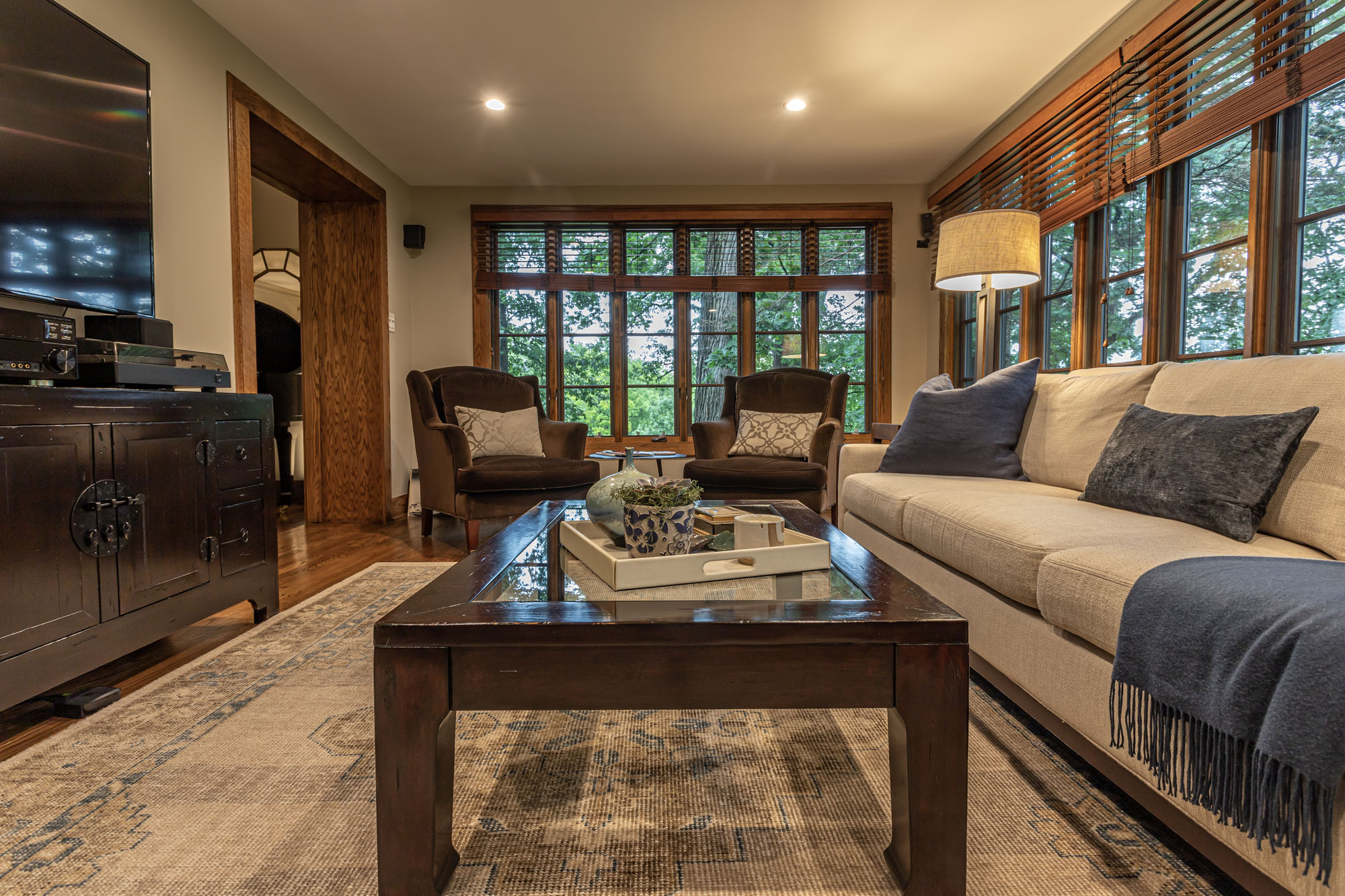 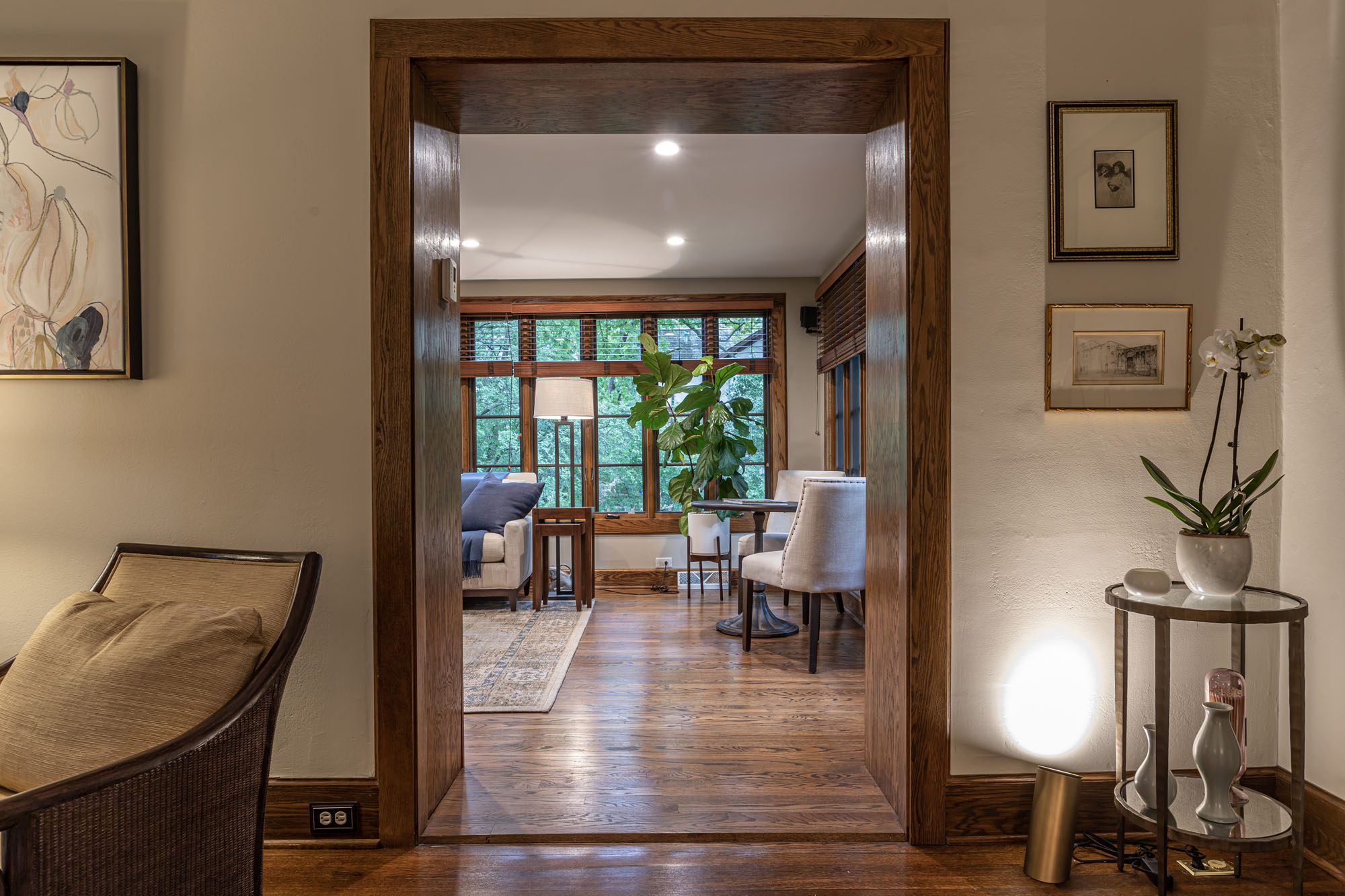 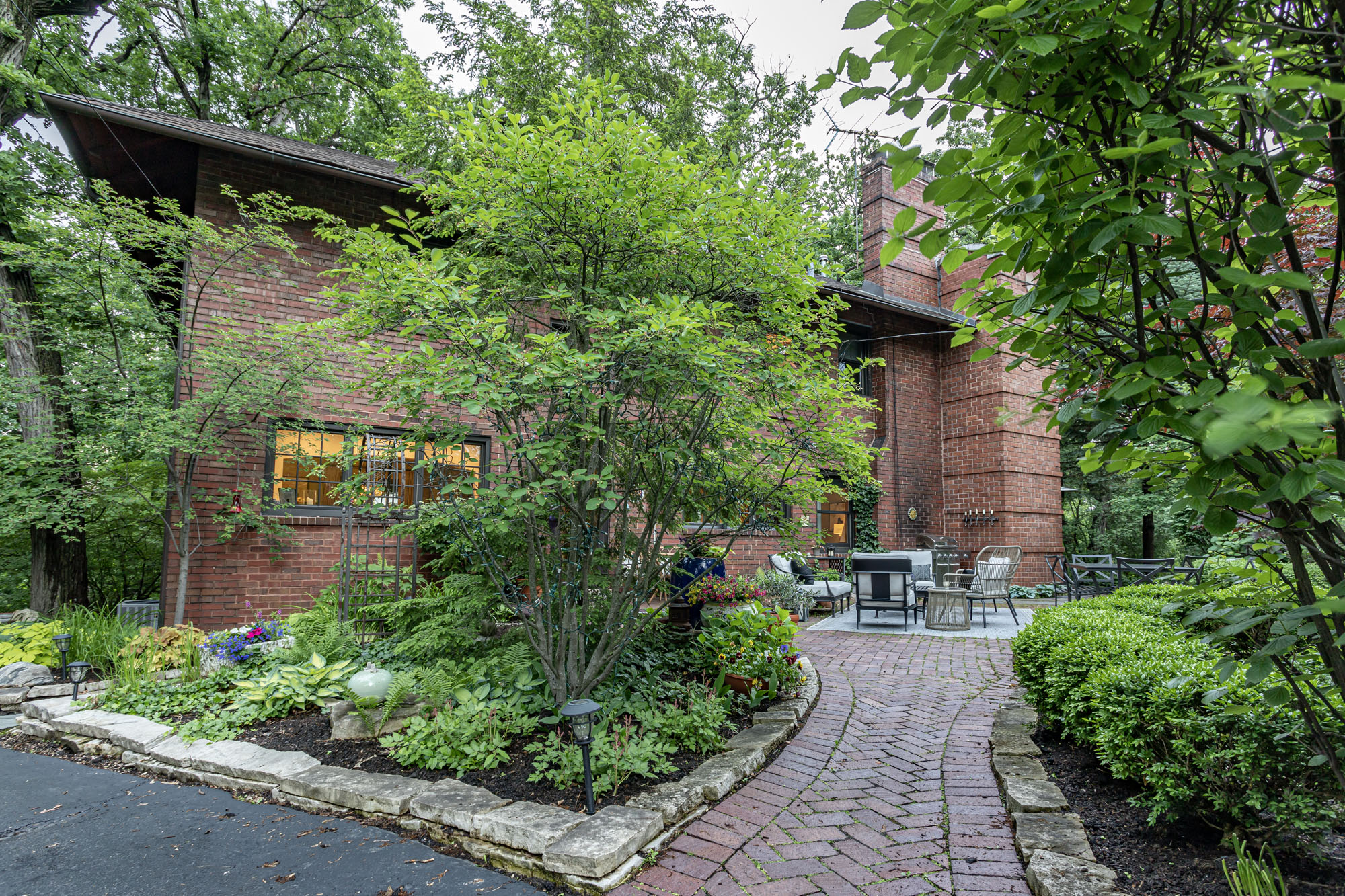 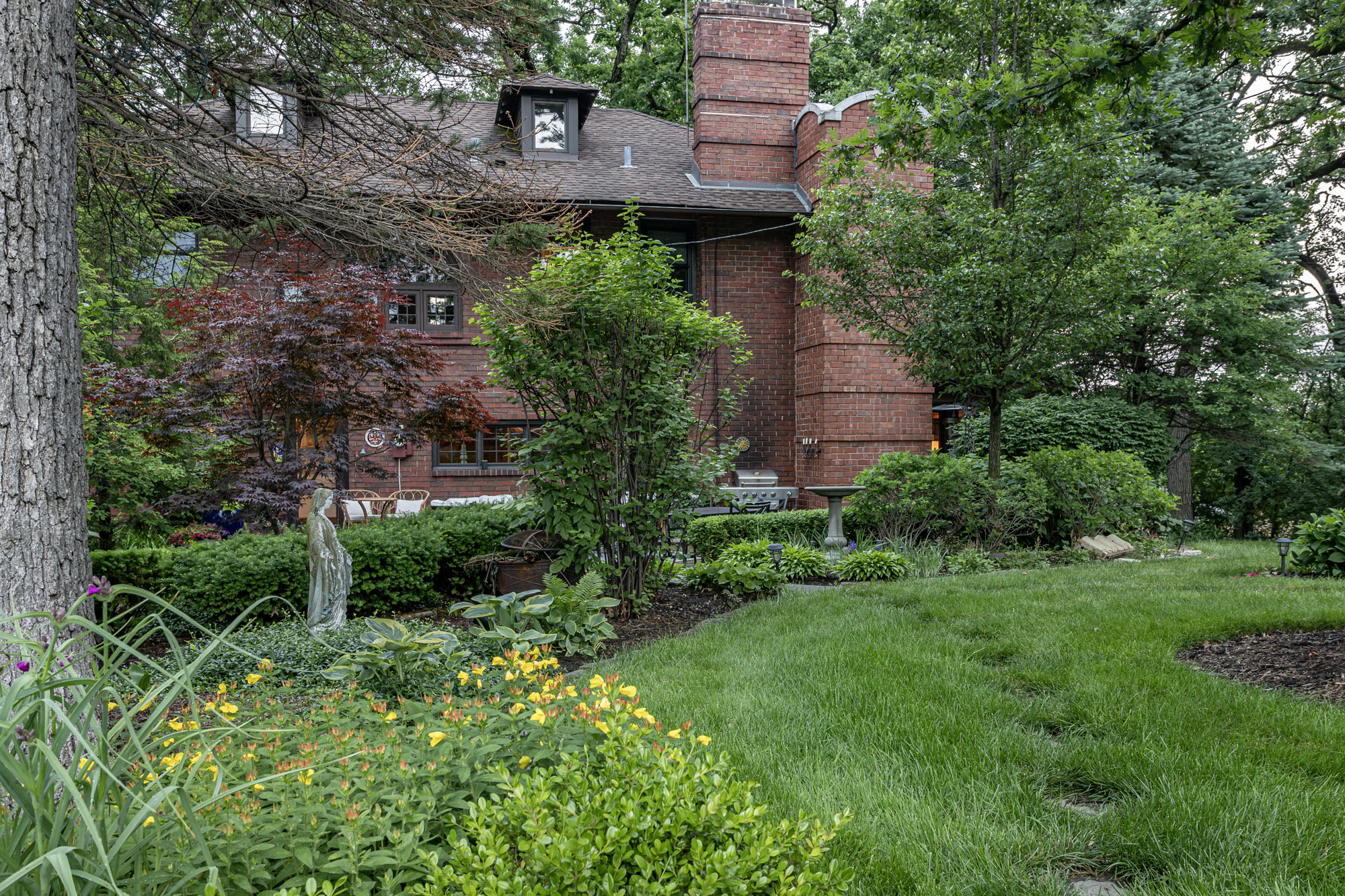 The Thomason house is one of 3 on this block attributed to architect George W. Maher; just a few doors down on the same side of the street is the George and Cora (Heffron) Murray House at 10352 S Longwood, designed in the more traditional Georgian Revival style and built in 1906. The Arthur Heffron House (1904) – sporting several features similar to the Thomason House – at 10347 S Longwood is more in line with Maher’s Prairie School work.
The hipped roof, strong symmetrical shape, and horizontality of the Thomason House ground it firmly at the crest of the Blue Island Ridge, while the arched entrance shows a bit of Maher’s motif-rhythm theory in effect, as this shape is found repeated inside the home. Its red brick construction is similar in shade and shape to two of Maher’s designs found close by: the aforementioned Arthur Heffron House, and Sanders School (1900) in nearby Blue Island. The sunroom at the south end of the house is an addition.
The home was built in 1907 for the family of attorney Frank D. Thomason, his wife Diana, and son Samuel. The 1910 census also lists Samuel’s wife, Alexina, their daughter Elizabeth, and a servant, Martha Hagen, as living in the home. Like his father, Samuel’s occupation is listed at the time as “lawyer.”
Described as a “pioneering” patent attorney, Frank Thomason was active in politics in the town of Lake (home of the Union Stock Yards) prior to its annexation by Chicago in 1889. Following his days in politics, he confined himself professionally to his law practice, eventually becoming a senior member of the law firm of Thomason & Lundy.
Frank and Diana’s son Samuel went on to become vice president of the Chicago Tribune, and eventually publisher of the Chicago Daily Times and Tampa Tribune. Both Frank and Diana Thomason passed away in their home at 10432 S. Longwood after illnesses – Frank died in 1926 at the age of 66, and Mrs. Thomason passed away in 1942 at the age of 81.
Samuel followed his mother in death only two years later at the age of 61, suffering a heart attack while hospitalized. Due to his lofty status in the industry, his obituary was published in newspapers across the country.
The home has been owned since 1984 by William and Susan Faber, who were gracious enough to allow us to photograph much of the interior, and who shared a collection of documents with us on the home’s history – including the Ridge Historical Society’s recognition of the home as a historically and architecturally significant structure in Beverly Hills/Morgan Park. The couple has done a magnificent job as stewards of the property, as it’s obvious from our photos that the home and grounds have been meticulously maintained under their ownership.

Directly to the south of the Frank & Diana Thomason House is a home built just 3 years later (in 1910) for their son and daughter in law, Samuel and Alexina Thomason. While this isn’t a Maher design, the home’s architect – Robert Seyfarth – worked for Maher early in his career, and possibly when he designed this house.

Seyfarth undoubtedly was introduced to the Thomasons thru the commission of the 1907 house, and may very well have had a role in the design of it. Seyfarth designed many houses independent of his position with Maher, and this may have been one of the last he designed while under his employ, or one of the first after establishing his independent practice – through our sources, we estimate that Seyfarth struck out on his own sometime between 1909 – 1911.