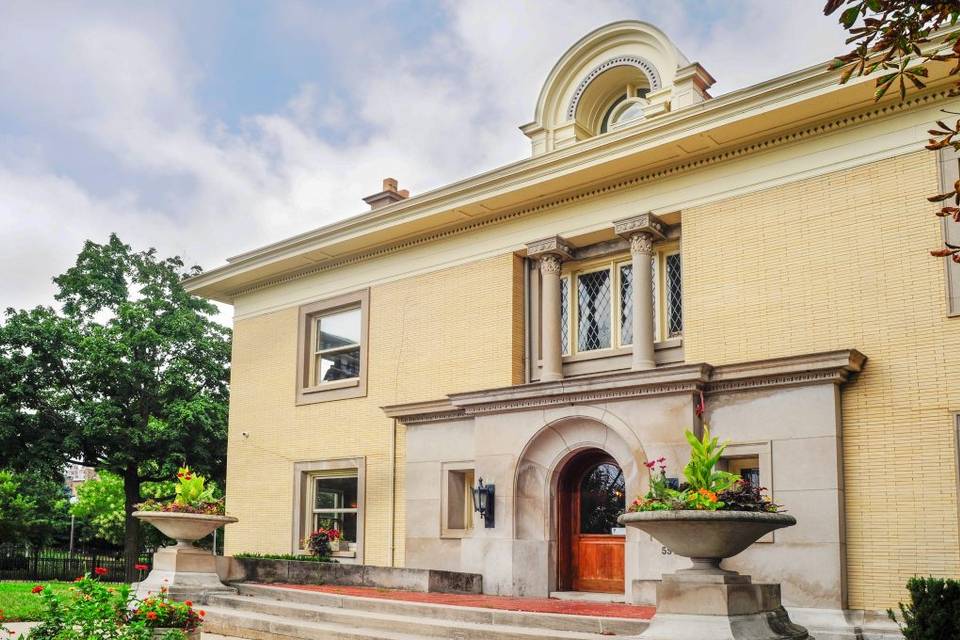 Colvin House sits on 1/3 of an acre of land and the house itself has over 6,000 sq. ft. of space. It was designated as a Chicago landmark in 1994, which protects its exterior from any alterations and prohibits its demolition.

The house was built in the Prairie Style, by architect George Maher. A contemporary of Frank Lloyd Wright, Maher designed many other grand homes in the area, as the lead architect during the original development of the Edgewater neighborhood at the turn of the 19th century.

One of Maher’s signature styles is his Rhythm-Motif Theory, which utilizes geometric forms and local flora to create a unique architectural fingerprint. In the case of Colvin House, triangles and tulips can be observed on the tops of columns in the front of the house and garage, as well as triangles lining the edges of the building. Two original stained-glass windows in the front of the house, designed by the architect, further illustrate this motif.

The home was named after its second owner, Edwin M. Colvin, vice president of the W.F. Hall Printing company, the largest catalog and magazine printing company of all time. At the time, Colvin House was one of many single-family homes along Sheridan Road.

The interior of the house was mostly renovated in the 1920s and also reflects the time period. Later, residents of the home further modified the house to their own standards, adding several of the ornate architectural details we see today, including the stucco wall coverings, elaborate crown moldings, and the plaster angels in the corner of the Parlor.

Damage to the house in its later years was caused by decades of neglect, including a split in the roof which led to severe water damage throughout the house. It has since been restored to its former glory! Repairs were made with a gentle touch, to maintain the integrity of the house’s history. Today, the house is almost as good as new! There are still a few repairs that are underway, including the front steps and the brick courtyard.

Restored by Angela and Stel Valavanis, today, Colvin House is home to Creative Coworking’s second location, and has new vibrancy as a coworking space and private events venue.